skip to main | skip to sidebar

I am not really working on this blog at the moment, as I am trying to focus my energies on my new romance comic book blog -- Sequential Crush!

Technorati Profile
Posted by Jacque Nodell at 10:34 PM No comments:

Ok, so this isn't history related, but it is comic book related. I have been lettering a comic book called Super Human Resources and it is going to be in the December Previews. It will hit comic shops in February. The trailer is pretty fun, so enjoy!

Let us take a minute to celebrate possibly the cutest character in comic books (well at least in the DC universe, Thing isn't so bad himself), Bat-Mite. Bat-Mite may be small, and he may somewhat resemble the Domino’s Noid in stature, but he has won over my heart. I can’t believe that I wasn’t aware of his existence until recently, when I started reading some old Batman stories. 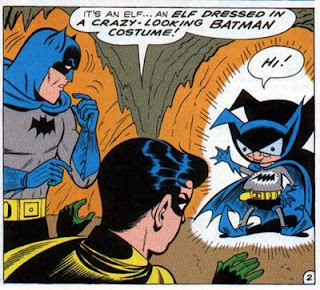 The Bat-Mite is a character from another dimension who is always trying to help Batman, yet despite his good intentions, usually is in the way. Bat-Mite really looks up to Batman, considering the latter his hero.

While I have yet to collect all of the issues featuring the little impling (something to hunt for a the next comic book convention I go to) his cuteness is exemplified in Batman #144 (December 1961) in a story called “Bat-Mite Meets Bat-Girl.” In this story, Bat-Girl is trying to win the heart of the Boy Wonder, Robin while Batman and Batwoman are out of town. The two teens are in charge of watching over Gotham City. While on duty, Bat-Girl’s advances are shot down by Robin, and later, she confides her tale of woe to Bat-Mite. Bat-Mite decides to help out (with no apparent benefit to himself) and play Cupid. While fighting criminals, Bat-Mite follows along invisibly and gives Bat-Girl powers that will not only defeat the thugs, but will simultaneously impress Robin. 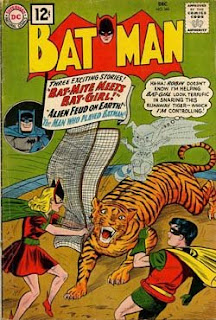 Unfortunately the plan goes awry during an effort to make Robin worry about Bat-Girl. Instead of being kidnapped by a gang of toys that Bat-Mite turned into human size, Bat-Girl is abducted by a real gang of criminals. Bat-Mite is so worried, that he eventually tells Robin what he did. Luckily Robin and Bat-Mite are able to track them down, and free the damsel in distress. Luckily, Batman steps in and reminds Robin that he is much too young for romance, though Bat-Girl kisses him despite the adult presence. Bat-Mite, with the cutest scrunched up nose declares that his work is done and that he must be leaving. The Bat-gang waves goodbye and bids adieu to the little "Cupid."

And so goes my introduction to the Bat-Mite. I hope to be seeing a lot more of him in the future!!!

Phew! I am back (and recovering) from my two week pop culture rendezvous in the Midwest. Both BrickWorld and Wizard World Chicago were great fun. I met so many new people as well as saw old friends. So much happened these past two weeks, but I will just summarize.

This was my first year at BrickWorld, but hopefully not my last. I had such a fantastic time! BrickWorld is a LEGO convention. Thats right, LEGO! Justin's Wild West setup was a hit and it looked great. It was so adorable watching all the little kids getting such a kick out of it. 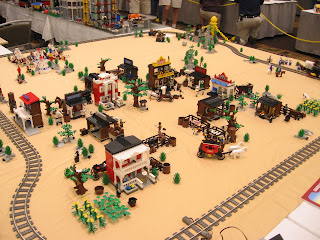 We had the opportunity to see so many other talented LEGO artists do their thing. I couldn't believe my eyes! Besides looking at all of the creations, we attended a really interesting round table discussion on females in the LEGO hobby and community. I was happy I was able to contribute my opinions even though I am new to this whole LEGO thing. A session led by one of the concept designers from LEGO was also really thought provoking. It was amazing to learn about all of the steps involved in creating a set, I would have never guessed it was that complicated.

Overall, I really liked BrickWorld if not mostly for the relaxed and friendly community-centered atmosphere. It was definitely unlike anything I have ever experienced at a comic book convention or academic conference. And oh yeah, how could I almost forget... I won an awesome LEGO Creator kit in the raffle. Now I can build my very own Stegosaurus! 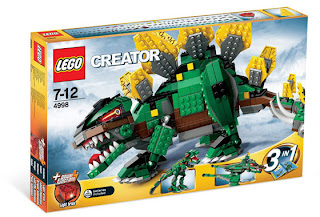 The weekend after BrickWorld we headed back to the Chicago-land area for Wizard World. I was on a mission to find romance comics primarily, and boy did I! This show seemed much more plentiful for romance comics than previous years. I bought enough comics to fill a shortbox! 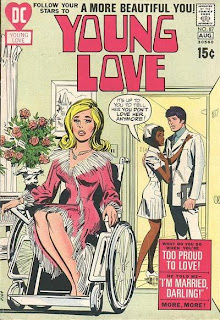 Besides all of the romance comics I found, I also almost completed my run of Dazzler. I think I have two issues left to buy. I am not sure why I didn't do it there. Oh well, next convention!

On a sad note and before I go any further, artist Michael Turner passed away over the weekend. I was so shocked to hear this, as was everyone else. He was so young, but he definitely left his mark on the world. Rest in Peace Michael.
On the romance comics note again, I was lucky enough to meet author Michelle Nolan who wrote the book I am reviewing, Love on the Racks. She is super sweet and took such a genuine interest in my aspirations to become a comic book historian. Meeting her was definitely one of the highlights of the convention! She was even kind enough to sign my copy of her book!

On Saturday night we went out to eat with the APE Entertainment crew. There were so many people it was a little chaotic, but super fun. Everyone is anxious for Super Human Resources to come out! We are almost done with the last issue!!! Check it out at www.superhumanresourcescomic.com. You won't be sorry!

All in all, Wizard World Chicago was a lot of fun for me, even though it wasn't as crowded as in years past. I tell you what was really fun though, seeing my name on the floor in Artist Alley! 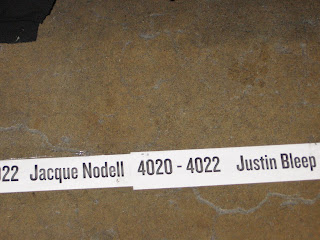 Well, I will have more updates later on. I am leaving for Washington, DC in eight hours. I will be working at the National Air and Space Museum again for a few months. Hopefully I won't be too busy after work though, and will get a chance to update this as often as possible. Look out for it!
Posted by Jacque Nodell at 4:59 PM 2 comments:

I always seem to have a multitude of "activities" going on for myself, and this summer is no exception. Since finishing grad school about a month ago I have been working on getting some of my comic book research published.

I am currently writing an article that I am going to submit for a journal about sports comic books namely comics from DC's Strange Sports Stories. I am also writing a review for the Journal of Popular Culture on Michelle Nolan's book, Love on the Racks. I just started reading the book, but it is really enjoyable so far. Once I am farther in I will update on that.

This summer though won't be all work and no play though. Next week I am leaving for Chicago to attend two conventions. You can find me at...

and
I am very excited for both! If you are going to be at Wizard World come see me at the UrbanSequence table in Artist's Alley!

More updates to come!
Posted by Jacque Nodell at 1:27 PM No comments:

Welcome to My Blog: AKA "I Will Never Have A Blog."

I always told myself (and others willing to listen) that I would never have a blog. I didn't really have a reason why I didn't want one, other than the fact that lots of people had blogs and my reluctance to hop aboard new technology. Yesterday though, as I sat reading and drinking coffee, I realized that I have a lot to say and what better environment to say it in than my very own blog? I also like taking on more and more projects when I am already overloaded with things to do!

So, in short, that is how this blog came to be. I plan to update as often as I can about comic books (most likely ollllllllddddddd ones), music, movies and anything and everything that strikes my fancy concerning history and popular culture. Enjoy!!!
Posted by Jacque Nodell at 4:10 PM No comments: